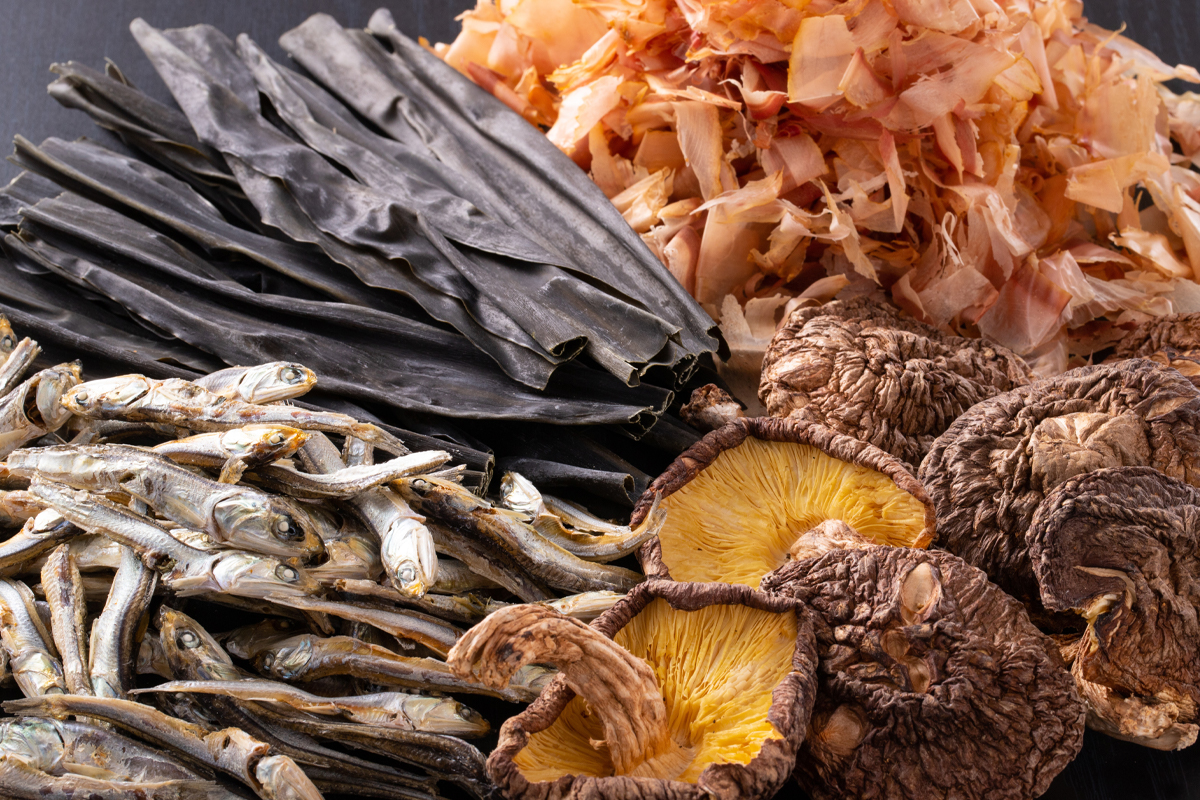 “What causes food to become more delicious?” If you think of that, the answer may be “umami”. Nowadays, the word umami has spread all over the world, but do you know what it is exactly? It differs from the taste that comes from salt and pepper, or other spices, and is actually a taste component that enhances a deeper and richer flavour in the food. In fact, the deliciousness of umami that people and their tongue experience is actually based on scientific evidence. There are three representative umami components: inosinic acid, glutamic acid and guanylic acid. Combining those three elements brings a synergistic effect to boost food’s flavour. “Dashi” is one of the most important ingredients of Japanese cuisine, and is a source of such literal deliciousness.

Dashi is indispensable to most Japanese dishes and recipes. By having correct knowledge with regard to using dashi, a dish can be made even more delicious. A variety of dashi has been used for a long time in Japan, and each has a different flavour and function. There may not be enough words to describe all of their profound aspects, however, dashi may be used similarly to how beef, chicken, seafood and vegetables are used to prepare food in other countries, and how bouillon or consommé are used in Western cuisine. The following are Japan’s main types of dashi and features. 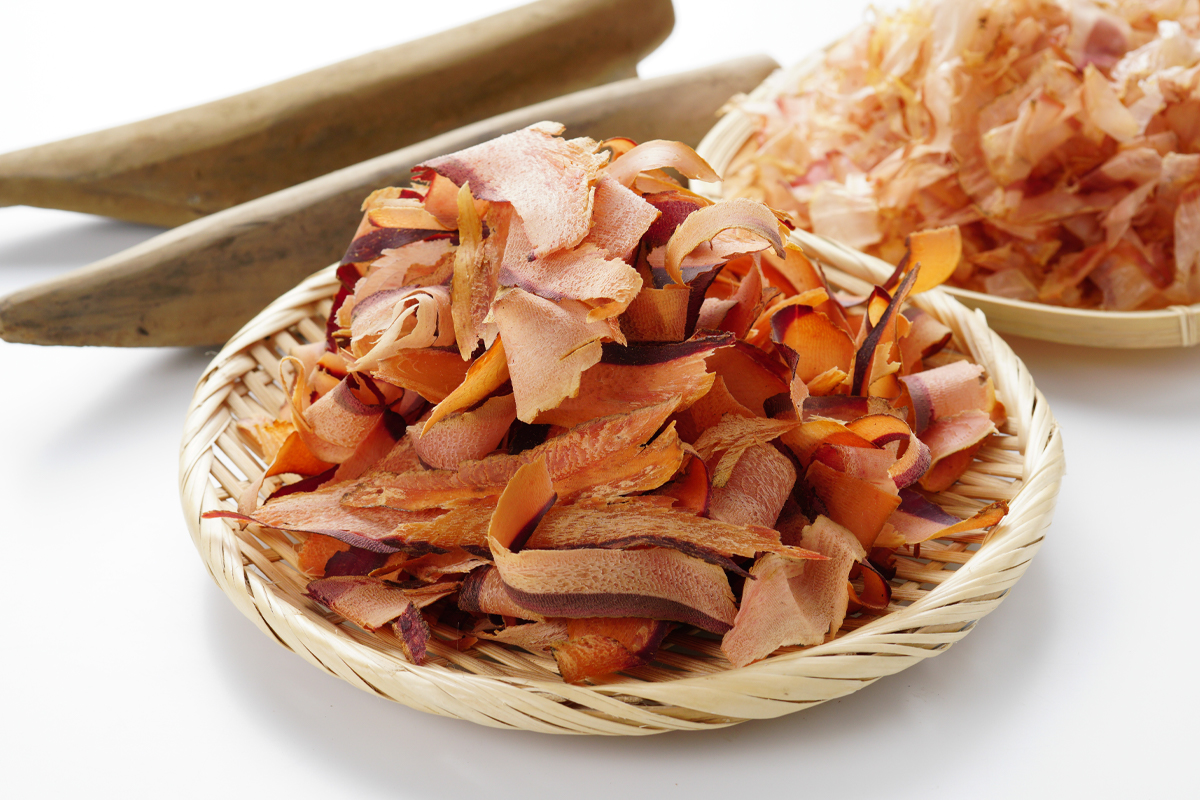 Katsuo (bonito) dashi is one of the most common and important broths for Japanese cuisine, which can be used with any dish. The umami component is inosine acid, and is further enhanced when used for soup dishes like udon and soba. Katsuo dashi is extracted from “katsuobushi (bonito flakes)”. The flakes can range in thickness, but some slices are as thin as 0.1 to 0.2mm. Before slicing, katsuobushi is hard-dried like a stone bar, and there are two main types. Those that look like black coloured bars are made in about one month, and are called “arabushi.” Then there are those fermented with mould, which are called “karebushi”. The latter takes at least three months in effort to create a rich scent with no fishy odour, and is the world’s hardest food with a water content of 13-15%.

To elaborate, smoked and dried fish is called “節 (bushi or fushi)”. While katsuobushi is the most typical bushi, there are different fish with different uses, such as “saba (mackerel) bushi”, “sōda (bullet tuna) bushi” and so on, made in the same production process as katsuobushi. Each has its own character and flavour of dashi, and in some areas, those dashi have been used for local dishes longer than katsuo dashi. 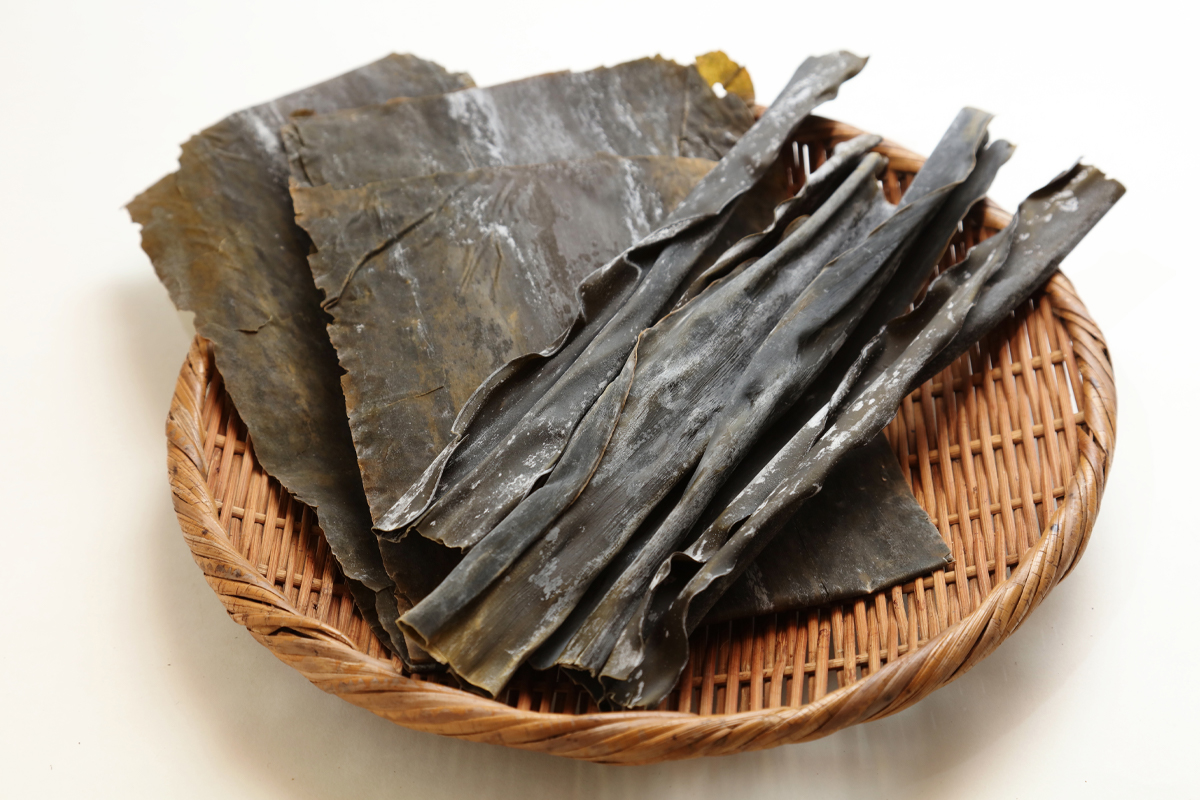 Kombu dashi is extracted from dried kelp and characterised by its elegant taste. It contains a large amount of glutamic acid as its umami component. There are several types of kombu and each has a different taste and aroma. Actually, not all kinds of kombu are suitable for dashi; for example, the one often sold as “早煮昆布 (Hayanie kombu)”, which means it becomes tender quickly when it is cooked, is recommended only for eating. Kombu dashi may be perfect for all kinds of dishes, but is especially suitable for rice dishes and stewed food that take advantage of the flavour of the ingredients themselves. When making dashi by combining animal-based dashi like katsuo and vegetable-based kombu, the flavour becomes richer due to the synergistic effect as mentioned before. 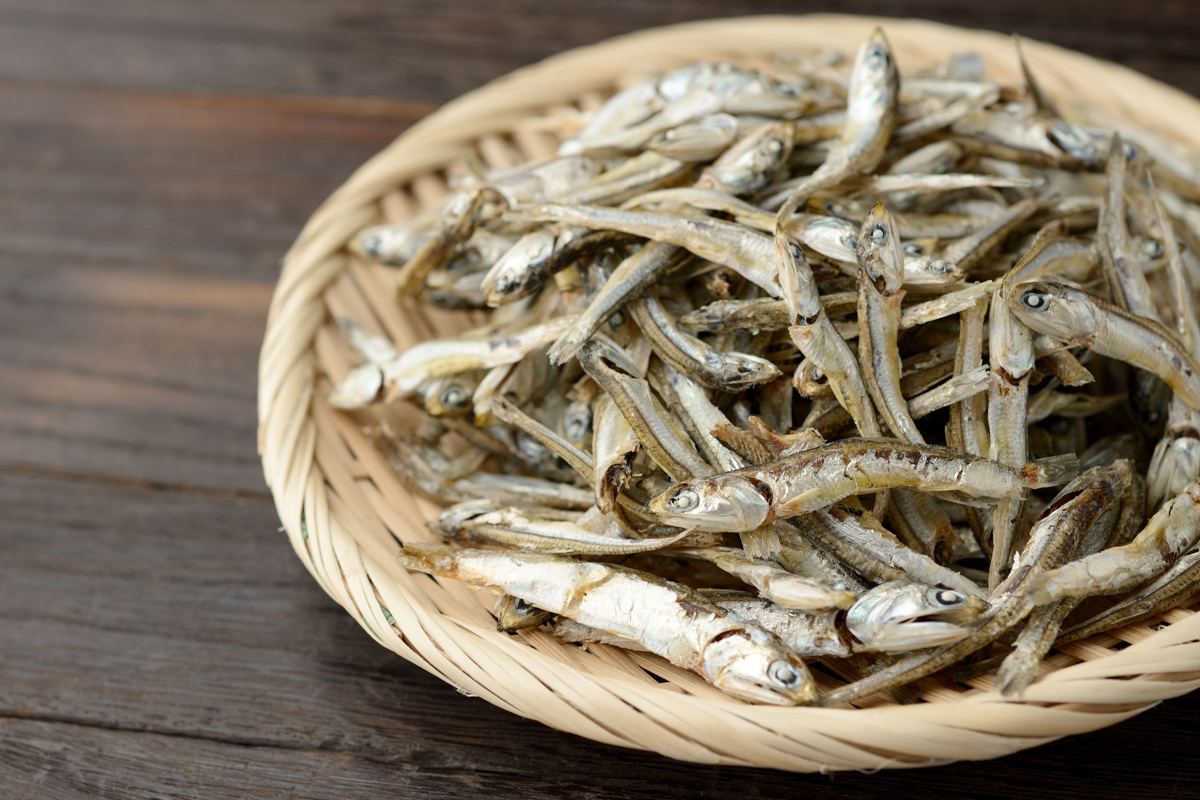 Niboshi dashi is extracted from niboshi which is boiled and dried small fishes. The umami component is the same inosinic acid as katsuo dashi and this dashi is characterised by a strong fishy flavour that especially goes well with miso soup. Anchovy is the most common ingredient of niboshi, but there are other types of small fishes such as other species of sardines, horse mackerel, mackerel, flying fish, even shrimp and so on. Among them, there is a flying fish is called “ago,” and has been used in western Japan, mainly in the Kyushu region, for a long time. It is more expensive than ordinary niboshi, and has a less fishy odour, and a fine and rich taste. By the way, niboshi is also called “iriko,” depending on the areas and people. 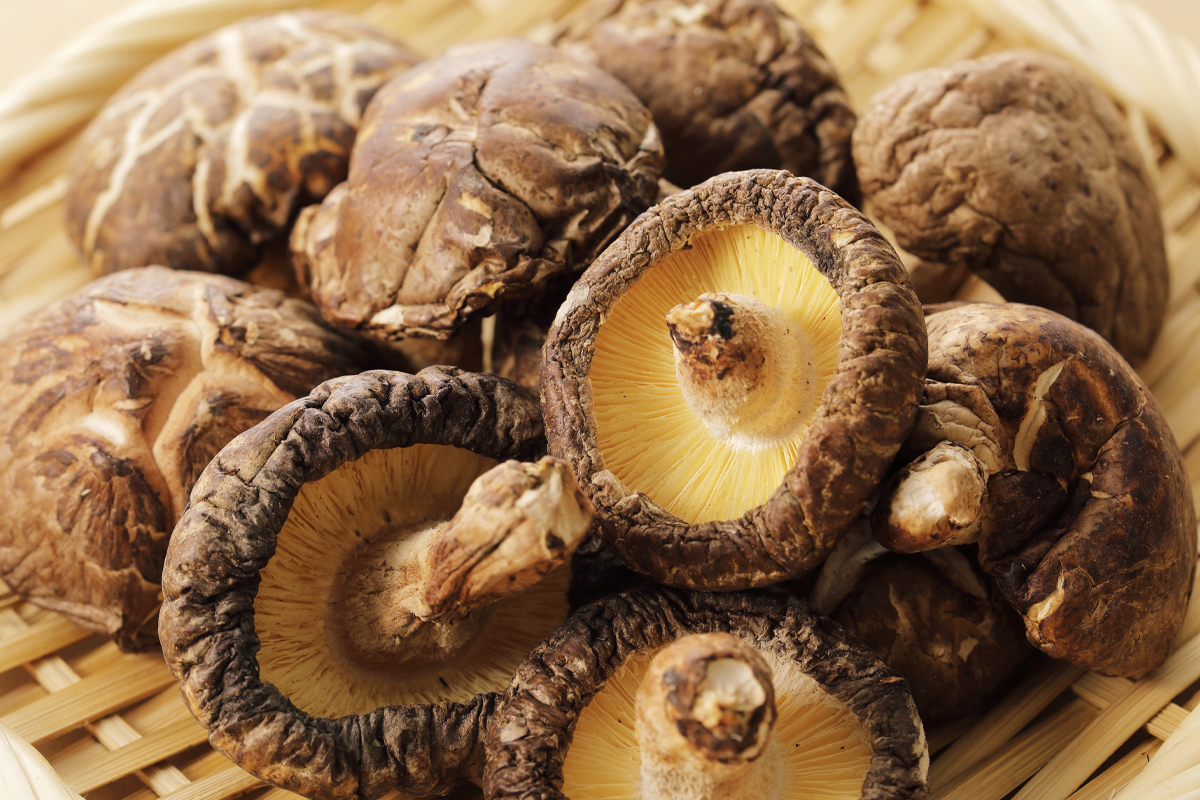 Shiitake dashi has a unique taste and aroma, and is extracted from dried shiitake mushrooms. By drying them, the main umami component guanylic acid is produced, and the subsequent flavour and nutrients are condensed. In order to cook them they need to be stretched by soaking in water, and that water is used as dashi soup, as it is rich in flavour and nutritional value. Soaking in cool water slowly, like putting it in the refrigerator for 10 hours or more, makes it more delicious. Shiitake dashi is often used with katsuo and kombu dashi together for cooking, where they demonstrate a large synergistic effect of umami. 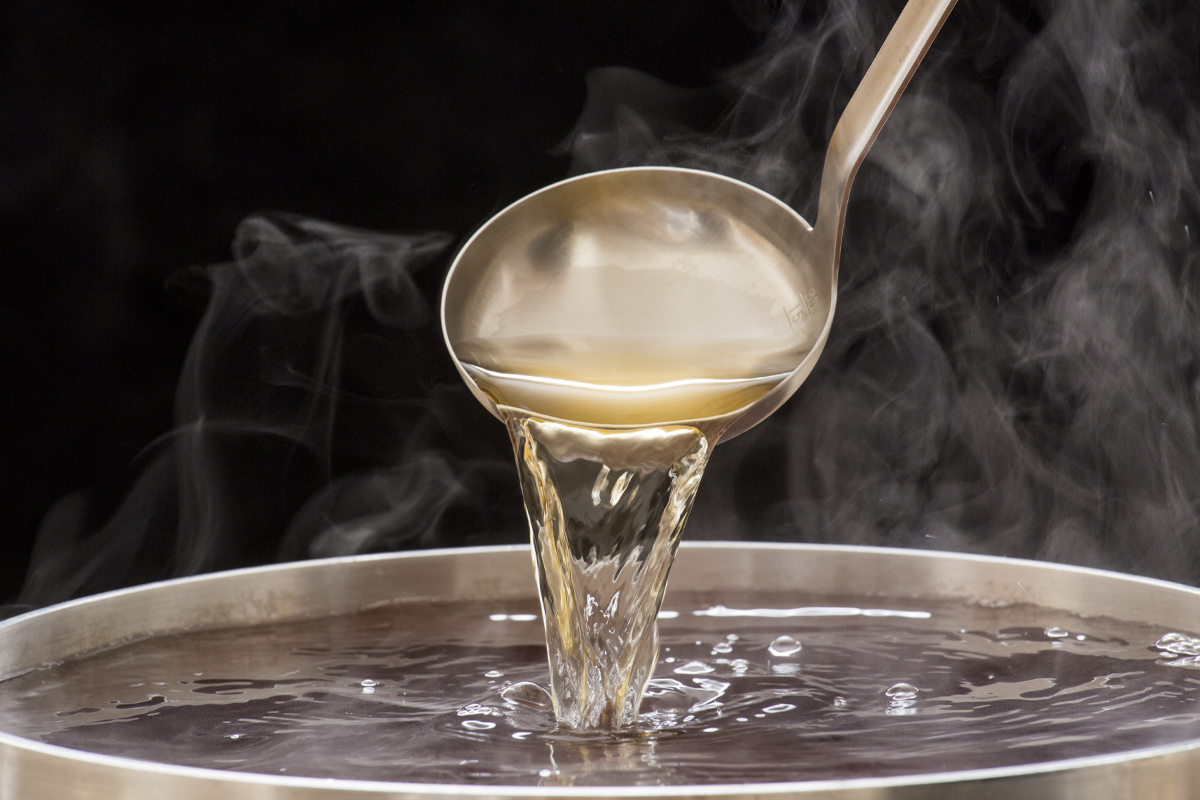 Dashi is closely tied to the daily Japanese meal, and is now sold as bottled liquids, granules, and small packs so that it is very easy to use for cooking and requires less troublesome work. It goes without saying that dashi is suitable for Japanese food, but in fact, it is not an exaggeration to say that it matches any dish. Therefore, if you are able to get it in any form, please try experimenting by using it in one of your own dishes at home.
For the subsequent articles, more details, such as how to extract each dashi properly, will be explained.

Why do Japanese people slurp noodles?

Top Topics Dashi and Umami: like a science experiment