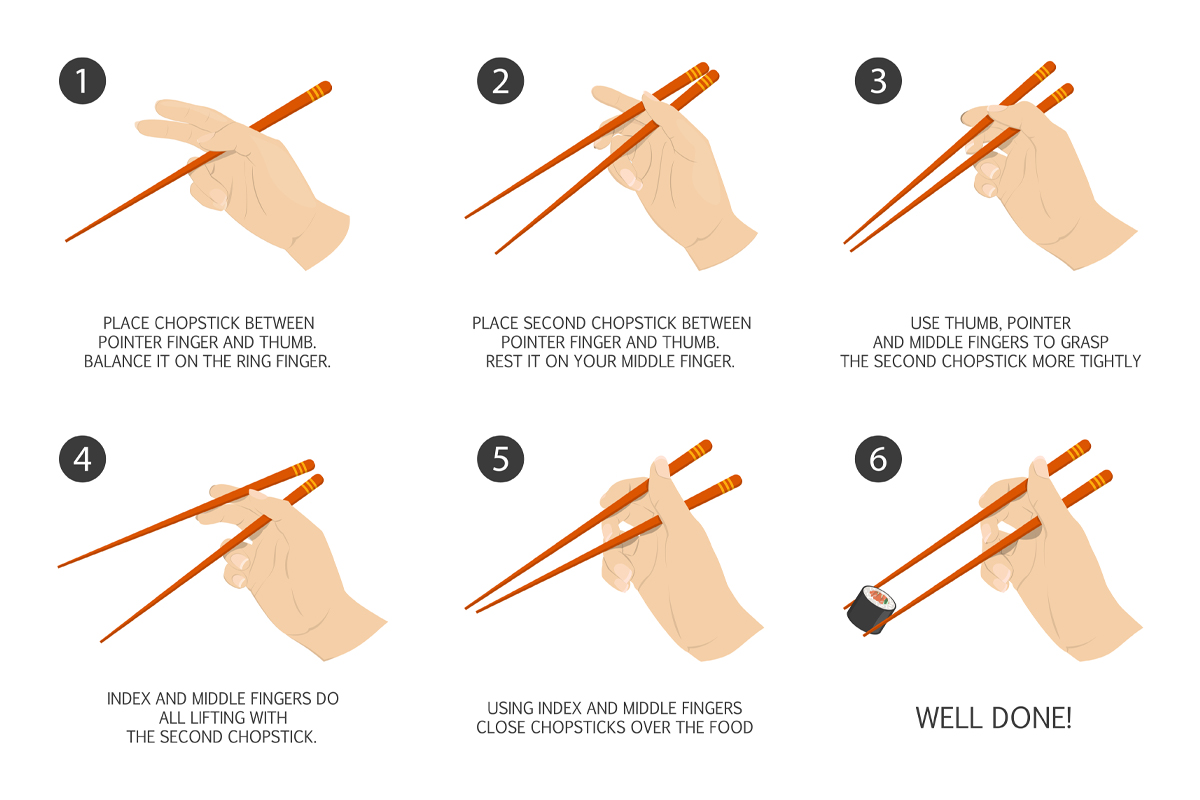 Chopsticks, which are called “Hashi” in Japanese, are one of the most important parts of Japan’s food culture. Although there are several theories about the origin, none of them are very clear as they have been used since ancient times. Looking at the world as a whole, about 30% of people use chopsticks. In Japan, however, there are also other types of chopsticks other than those used to eat, such as for cooking, sharing food and special occasions.

In old times, Japanese families seemed to be much stricter about these manners when dining at home, and it is still often said that the use of chopsticks reflects the person’s background. In fact, there are many discourteous manners when using chopsticks, which are considered as unpleasant or bad luck for those who share the table. They are called “Kirai bashi”, “Imi bashi” or “Kinji bashi” (“Hashi” is pronounced as “Bashi” if something is added before).

Arai bashi
Washing in a soup or beverage.

Chigai bashi
Using mismatched pairs of chopsticks. This is the style used to pick up remains after cremation.

Chigiri bashi
Holding one chopstick in each hand to tear food to small pieces.

Furi bashi
Shaking off soup or other liquid from the tips of chopsticks.

Furiage bashi
Raising the tips of the chopsticks upwards.

Futari bashi
Grabbing at the same food as another person.

Hane bashi
Removing what you dislike by using chopsticks.

Hashiwatashi/Awase bashi/Hiroi bashi
Sharing something from yours to another person’s chopsticks. This is only to pick up remains after the cremation and put them in a crematory urn.

Hidari bashi
Holding them with the left hand. (You should generally use chopsticks with your right hand.)

Jika bashi
Grabbing food with your own chopsticks from a communal plate.

Kaki bashi
・Putting your mouth on the edge of a dish and scooping food into your mouth with chopsticks.
・Scratching your head with them.

Kara bashi
Picking something up once and then returning it.

Kasane bashi
Only eating only one dish, not others.

Koji bashi
Messing up a dish with chopsticks trying to find out what you like to eat.

Komi bashi
Having a large amount of food in your mouth and pushing it further with them.

Kosuri bashi
Scraping splinters off disposable wooden chopsticks by rubbing them against each other.

Mayoi bashi
Pointing your chopsticks at various plates while deciding what to eat.

Mochi bashi
Holding a bowl at the same time when you are holding your chopsticks.

Mogi bashi
Picking off something (usually rice grains) on them by using your mouth.

Namida bashi
Soup dripping off the tips of the chopsticks.

Nigiri bashi
Holding them in a fist.

Ogami bashi
Holding them in a praying fashion with folded hands.

Otoshi bashi
Dropping them on the floor during a meal.

Saguri bashi
Stirring up a dish with chopsticks to check what is inside.

Sakasa bashi/Kaeshi bashi
Using chopsticks upside down when you pick up food from a dish. (Using other unused chopsticks is better.)

Sashi bashi (指し箸)
Pointing at people or things with them.

Seseri bashi
・Poking at food with them over and over again.
・Using them like a toothpick to remove something stuck between the teeth. It is also called “Yōji bashi”.

Soroe bashi
Pushing them vertically against the table to line up the tips.

Tataki bashi
Tapping the dishes with them like instruments or getting someone’s attention with the sound.

Tate bashi/Hotoke bashi
Sticking chopsticks vertically into a rice bowl. This is done to be offered to a deceased person at a Buddhist funeral.

Uke bashi
Having another helping you while you are holding them.

Utsuri bashi/Watari bashi
Moving items to another dish after once you tried to pick something up.

Watashi bashi
Putting them over the dish in parallel during a meal. It means “I don’t want to eat it anymore”.

Yoko bashi
Using them in parallel to scoop up food like a spoon.

Yose bashi
Pulling a dish towards yourself by using them.

Zengoshi
Picking up food from across the table over other dishes with chopsticks instead of bringing the plate to you.

You may have been noticed that there are similarities between some definitions and also some are too detailed. Once again, the most important thing is to enjoy your meal without worry. However, you will not lose anything by keeping these manners in mind. We hope this topic enables you to expand your knowledge about chopstick etiquette.